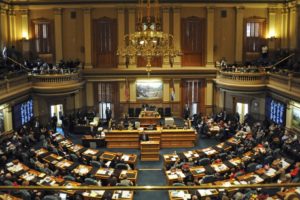 On Thursday, June 22nd, both the NJ Senate and Assembly will hold Voting Sessions in Trenton. There are several pieces of legislation up for a vote this week that would impact Safety in our state:

A373 Joan’s Law This is a bill of particular interest for KNJS–we applaud the tireless efforts of Rosemarie D’Alessandro in working to enact stricter penalties–Life in Prison with No Parole–for adults who murder a child in the course of sex crime. A373 expands Joan’s Law, raising the age of victims affected by this bill to those under the age of 18 (current law covers victims under the age of 14). This is the last hurdle for the bill before it goes to Governor Christie for his signature.

There are several other bills that impact victims of sexual assault that will be voted on by the Senate, including
S3223, the Sexual Assault Victim’s Bill of Rights.

Last but not least, A2320 seeks to raise the minimum age for purchase and sale of tobacco products and electronic smoking devices from 19 to 21.  The measure already passed in the Senate, but with opposition, and it’s likely this will face even more pushback in the Assembly on Thursday.  While restricting tobacco sales for teens would be a positive measure from a health and well-being point of view, the Office of Legislative Services estimated that if enacted, it will result in anywhere from $15.5 million to $42.9 million in state revenue losses over the next 3 years (mostly from cigarette taxes).

A4372 to be heard TODAY in Asm. Law & Public Safety Committee