Once A-764 was designated “Alyssa’s Law” on March 12th, I started getting lots of questions about panic alarms, and how exactly the provisions of this bill might be put into place if and when it is signed into law.

While I don’t profess to have all of the answers just yet–this is a learning process for me, too, and the shooting at Marjory Stoneman Douglas only happened a little over 5 weeks ago–there are a few things that I can offer clarity on. (If your only question is “How Can I Help?” go ahead and scroll down to the bottom.)

WHY IS THIS BILL NECESSARY?

Unfortunately, with each new school shooting that occurs in America, the threat of an active shooter situation someday becoming a reality for students in New Jersey grows.  For example: as of today, there have been 306 school shootings in America since 2013, according to Everytown USA.  When I first started researching A-764, right after the shooting in Parkland, that statistic was only 290–yes, there have been 16 additional school-related shootings in America since the shooting at Marjory Stoneman Douglas High School on February 14, 2018.

BUT WHY PANIC ALARMS?

One consistent recommendation that I keep coming across in my research, which includes various School Security task force reports and the recently-released after-incident report issued after the 2013 shooting at Sandy Hook Elementary School, is that rapid notification of law enforcement is of paramount importance.   Placing a call to 9-1-1 as quickly and efficiently as possible must be a priority if we are to reduce the loss of life when threatening situations occur in our schools. Enhanced communication within the school building is also crucial: the faster that administrators and teachers can initiate a lockdown when a threat is discovered, the faster we can secure classroom doors and get our students to an area of relative safety until the threat has been neutralized by law enforcement.

HOW MANY BUTTONS WILL EACH SCHOOL NEED? WHERE WILL THEY BE LOCATED? AND WHAT IF A STUDENT PRESSES THE PANIC BUTTON BY ACCIDENT?

I hear questions like these a lot, and it never ceases to amaze me how narrow a concept people seem to have when it comes to panic alarms, and specifically, panic buttons.  Maybe it’s because we all grew up watching shows like Family Feud, Jeopardy, The X Factor, and The Voice, where the pressing of a big, centrally-located button as quickly as you possibly can is the main objective.

That is not what A-764 is about. It is not going to mandate a giant button to be placed in the center of the principal’s desk that someone could accidentally lean on.  In fact, the word “button” does not appear anywhere in the bill. One of the bill’s greatest strengths, in my opinion, lies in its lack of specificity as it pertains to what type of system would be put into place. This will allow NJ school districts the flexibility they need to find a system that works best for them, and it is why I disagree with the push from certain lobby groups to spell out additional criteria for what is required under the bill.

Why? Because there are many different types of panic alarm systems out there, and the technology is constantly changing and evolving.  Just last week, I saw a demo for the panic alarm app that I’ve mentioned in previous posts, and it was fascinating stuff.  I’m told that this is the type of panic alarm system that is now used at Sandy Hook Elementary School, in all schools in Nassau & Suffolk County NY, and in all schools located in the State of Arkansas.

I’m not affiliated in any way with the app company, so I won’t go into too much detail on how it all works, because there may very well be other systems out there that function just as well if not better (still researching that!).

What I can tell you is that the system I saw is fully integrated with the 9-1-1 call system–another recommendation I’ve come across repeatedly in my research, where security experts caution that there is no substitute for calling 9-1-1 directly.  The emergency dispatchers in the 9-1-1 system have the knowledge, experience, and training that is required to quickly assess a call, and to deploy the proper response necessary to address any emergency situation. 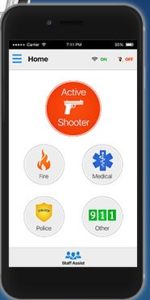 The app’s system of “alert buttons” include an active shooter button, police button, EMS, Fire, and a Staff Notification button that can be used for non-emergency communications, and there are safeguards to ensure that when the button is pressed, it is done so intentionally.  Students would not have access to the app, but all teachers, administrators, and school staff would, via their cell phones. (And while it works best with a smartphone, teachers and staff who use flip phones would still be able to use the app.)

Another interesting aspect of this system is that it designates a pre-determined school zone (via GPS geofencing) that will alert the 9-1-1 dispatcher if ANYONE makes a 9-1-1 call from within that zone–whether they have the app or not. So, if a parent is out in the parking lot of the school–an area outside of the building that is nevertheless part of the designated “school campus” geofence–and they see something that makes them suspicious enough to call 9-1-1, the dispatcher will immediately be able to see that the call is coming from within the borders of that school, and if necessary, the dispatcher can initiate the lockdown sequence via the app to everyone within the school building–before the threat has even breached the front door.

HOW MUCH WILL THESE PANIC ALARMS COST OUR SCHOOLS TO IMPLEMENT?

The Office of Legislative Services has already determined that the installation of panic alarms and emergency lights called for under this bill would be fully-funded under the existing funds available to all school districts in NJ from the proceeds of bonds issued by the Economic Development Authority (EDA) under the “Educational Facilities Construction and Financing Act.” These bonds would be issued even in the absence of this legislation.

IF WE WANT TO DETER SCHOOL SHOOTINGS, SHOULD WE BRING BACK THE DEATH PENALTY TO NJ?

In the wake of the shooting Parkland, there was a group of NJ legislators who expressed a desire to reinstate the death penalty in our state, as a deterrent for school shootings.

Here’s the thing: if you look at the most deadly shootings that have occurred in the U.S., in almost every instance, the shooter is suicidal, and the rampage ends with the shooter turning the gun on himself.  A few examples:

— April 1999, Eric Harris and Dylan Klebold brought guns and bombs to Columbine High School, killing 13 people and wounding 23 others before killing themselves.

— December, 2012  After shooting and killing 20 children and 6 adults at Sandy Hook Elementary School, gunman Adam Lanza turned the gun on himself.

— October 2015  Nine people were killed at Umpqua Community College by gunman Chris Harper-Mercer, who then committed suicide after exchanging gunfire with sheriff’s officers.

— November 2017, Gunman Devin Patrick Kelley committed suicide with a self-inflicted gunshot to the head, after murdering 25 people at the First Baptist Church in Sutherland Springs, Texas.

As you can see from the list above, the threat of losing one’s life is not a deterrent for those who engage in mass shootings–if anything, death is part of the enticement.  Reinstating the death penalty will do nothing to stop someone who already wants to die.

WHAT IS THE CURRENT STATUS OF ALYSSA’S LAW?

HOW CAN I HELP?

There are several things that you can do to show your support for Alyssa’s Law:

— Email your local legislators and ask them to support Alyssa’s Law, by signing on as co-sponsor if they haven’t already done so, and by voting YES when it comes to them for a vote. You can find your local legislators at the NJ LEGISLATURE WEBSITE (<–click that link right there!), choose your Municipality, select their names, and write to them in support of the bill.

— Sign up for our email blasts using the Subscribe Form at the bottom of our Home Page  (Fair warning: I email infrequently, and I never share my list with anyone, for any reason–because I can’t stand spam!)

Making A Difference, One Person At A Time

A Visit with Paul & Alice Montelaro

Montelaro Episode of On the Case with Paula Zahn airs this Sunday, 6/18!