Sad news, my friends: we learned today that Dusty, the German Shepherd puppy who was the inspiration for a ground-breaking New Jersey law that protects seeing eye dogs and seeing eye puppies-in-training, died on February 19, 2021. Dusty was 12 years old, and leaves behind a lasting legacy that began after a scary attack that nearly took his life over a decade ago.

In 2010, Dusty was an adorable 1-year-old German Shepherd puppy and seeing eye dog in training from The Seeing Eye guide dog school in Morristown, NJ.  Dusty lived with his volunteer trainers in Woodcliff Lake, Roger and Sheila Woodhour. In the Summer of 2010, while out on one of their daily walks, Dusty and Roger were the victims of a sudden, violent attack by an unleashed pit bull. Dusty managed to survive his grave physical injuries, but his mental and emotional trauma were considerable, and he was not able to continue in the Seeing Eye program. The led to a considerable loss in time, effort and money spent on his training.  Unfortunately, attacks on service animals are quite common, and the laws protecting these canine heroes are woefully inadequate.  Keep NJ Safe, along with Mr. Woodhour and representatives from The Seeing Eye, worked directly with state legislators to draft a bill that would finally offered to protect service animals like Dusty, and hold pet owners responsible in the event of a dog-on-dog attack. 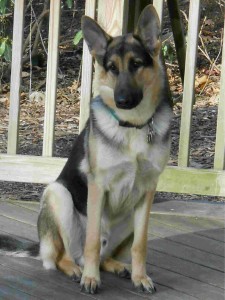 That bill, known as “Dusty’s Law”, passed both houses of the NJ legislature, and was signed into law on January 17, 2014.  As a direct result of Dusty’s Law, 47 states in the U.S. now have similar laws based upon it, which afford protections to seeing eye dogs and guide dogs in training. Dusty lived out the rest of his years with a caring adoptive family who adored him, and gave him a wonderful, active, happy life.

Thank you to everyone who supported us when Dusty’s Law was making its way through the legislature all those years ago. Please keep Dusty’s loving family adoptive family and the Woodhours in your thoughts as they mourn his loss. We can all take comfort in knowing that Dusty made such a significant difference in the lives of so many other dogs, not just here in New Jersey, but nationwide.

A4372 to be heard TODAY in Asm. Law & Public Safety Committee

CALL TO ACTION: Please Sign Our Petition to Deny Parole for Angelo Speziale