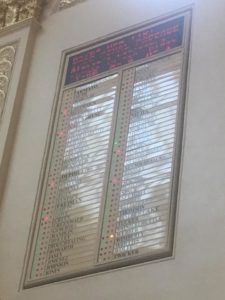 While I was very pleased to see such strong bi-partisan support for this bill–several Assemblymembers who voted No in 2016 changed their votes to a Yes this time around–there were still a handful of holdouts who, without explanation, continued to oppose it:

Speaking on the floor of the Assembly just before the vote, Assemblyman Tony Bucco said that he was supporting the bill this time, but he requested that the bill be amended to allow some way for school districts who have already installed panic alarms to be reimbursed for the expenses already incurred before the bill’s passage.  This struck me as somewhat ironic–if only he and his other colleagues who opposed the bill when it was up for a vote in 2016 had voted Yes, perhaps Governor Christie wouldn’t have pocket vetoed it, and these school districts he is concerned about would not have to be reimbursed retroactively.  It’s also a bit curious that this bill has now passed the Assembly four times, and yet, this is the first time this concern has been raised.

I plan to contact Assembly Bucco to see if he has, in fact, heard from any school districts throughout the state who have previously installed panic alarms and emergency lights, and if so, how much they’ve spent, so that we can get some idea of just how many schools, if any, this affects in the State of New Jersey.

Nevertheless, today was a good day–Alyssa’s Law has cleared the full Assembly, and in doing so, moved one step closer to final passage.  The next step: Alyssa’s Law must be heard in the Senate Education Committee, and if cleared, will go to the full Senate for a vote.

THANK YOU to everyone who responded to our Call to Action and contacted their legislators—YOU helped make a difference!